Waking up at the peak of dawn, I remained in bed for a little while longer. Only to arise once that sun had fully risen. I lay there for almost an hour. Trying to normalise the time my eyes opened. Though sleep was completely of my mind. The extra lie-in is still what my body needed. Plus I was sore from yesterday’s mini-workout.

What could I possibly do apart from browsing social media? My time on the apps has increased extraordinarily over the past two weeks. Though I was searching for Instagram and Photoshop ideas and not just blandly scrolling.

Getting out of bed, I finally start my day, going about my usual morning routine. Skincare followed by breakfast. Getting my natural product based glow on, I make my way down the stairs to fill a bowl with pudding. I did not find any semolina yesterday at Tesco to stock up on. So oats it was.

With breakfast sitting beside me. I started early on getting some work done. After three hours of moving pointers around on Photoshop. It felt like I wasn’t making any progress at all. But at the same time, I had gotten somewhere, just not the finish line. Closing the program, I released the mouse that I had been holding for hours. Stretching my stiff hand. I was contemplating on deleting everything I had been working on for the past few days. Not wanting that time to go to waste. I gave myself a break. The break ended up consisting of a three hours nap. The early rising had finally caught up with my tired body.

Some time away from the computer and a much-deserved nap did me some good. I was ready to get working on the line drawing again. A few hours of slaving away with pointers and I was finally done. Although I had optimistically planned to fill the whole page with lines. Instead, an early ending was on the horizon. I do think finishing off mid-page adds a more minimalist look, that I had originally been aiming for.

This piece was inspired by geode gems and in some clean way messy paint. Despite how impatient I became with this drawing I do plan to give it another try, but with a new quicker technique.

Dinner was quick and simple, a few lazy kebabs on the pan and dinner was served. I took the plate to my room, to spend the last few hours of the day being unproductive, with a good book and a glass of carrot and apple juice. 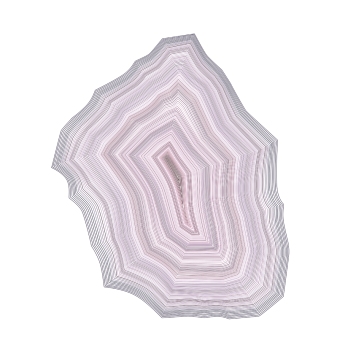